Starting pitchers Jeff Weaver and Chris Carpenter walk from the dugout to the right field grass to get in a little pre-game practice before Game Three of our series against the Dodgers in LA. 7.23.06

These two guys spent an awful lot of time together while wandering around the ballpark here at Chavez Ravine. They did drills together, threw to each other, and seemingly kept each other company throughout the series.

As this picture was being taken, Cardinals fans in the stands were shouting out kudos of all kinds to Weaver for his winning effort the night before. He was the captain at the helm of Game Two in which he pitched 5 2/3 innings. The RedBirds beat the Dodgers 6-1, making our record 6-0 against them this season. 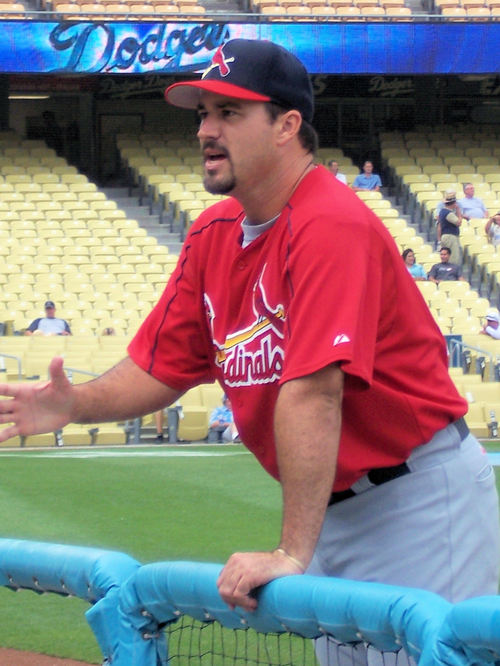 During the warmup period before Game Three, Cardinals starter (though not today) Jeff Suppan came out to meet and greet some friends. 7.23.06

Just a reminder, Jeff is from the LA area so I’m sure his trips to Dodger Stadium are typically full of family and friends.

But here’s something: Supe is a lot bigger than I ever gave him credit for. It seems that I’ve always found him so remarkably unremarkable that I’ve never stopped to appreciate what a big man he is. And by big I mean thicker, too. He’s really a substantially built guy. I don’t know why I’m so enthralled by this, but I am. It was truly a suprise to “discover” him in this way.

And, in case you care, he didn’t throw at all this day. (At least not out in public.) It must have been his off day– the second day after a start.

Game Three’s starter, Jason Marquis, makes his way from the dugout to the right field corner where he would first warm up in the grass and then take to the bullpen mound to prepare for the final game of the season against the Dodgers in LA. 7.23.06

Jason came into this game with an 11-7 record (tied for the National League lead) and with a series sweep against the Dodgers (for the current stand as well as for the season) on the line. 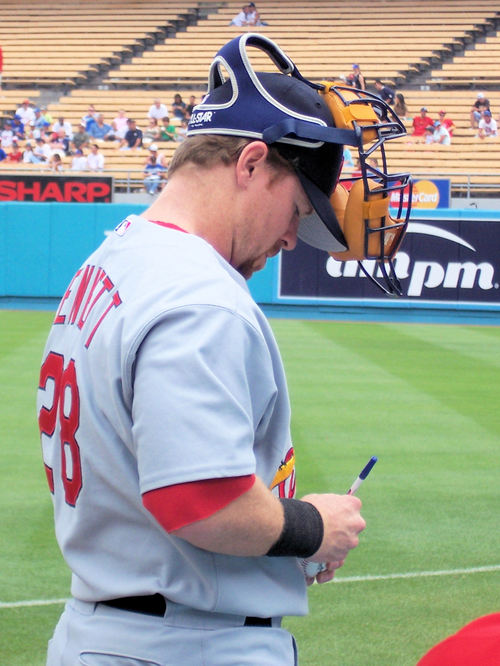 Catcher Gary Bennett stopped along the right field wall to sign autographs for fans as he made his way to the visitor’s bullpen for the pre-game rituals that would prepare him and this game’s starter, Jason Marquis, for Game Three of the Dodger series in LA– and the final game of the season between our two clubs. 7.23.06

Bennett has caught more than half of our winningest pitcher’s games this season, including all of the games during Marquis’ stretch of five wins in a row during May and June. Together, Jason and Gary have racked up a 7-4 record this season.

It’s also worth noting that throughout April and May, Gary was Jeff Suppan’s regular catcher. Together, they went 5-4 during that span. However, starting on May 31st, Supe has deferred to Molina’s direction with Bennett only catching his old battery mate three times since. (With a record of 1-1, by the way.)

Rookie Chris Duncan shakes hands with friends of team trainer Barry Weinberg’s before Game Three of our series against the Dodgers in LA. 7.23.06

Many of our players hail from the SoCal area (or at least have ties here) and so several folks had friends and family in the stands this weekend. Barry was no different. Before this game he came out of the dugout loaded down with goodies for his visitors. And everytime one of the players wandered out to get some air or to take a look around, Weinberg was sure to have them come to the railing and meet his guests.

Reliever Braden Looper walks from the visitor’s dugout to the grass in right field to warm up before Game Three of our series against the Dodgers in LA. 7.23.06

You’ll notice that the field behind him is rather empty. Neither team took infield practice or BP before today’s game. Only the Cardinals pitchers appeared from the depths of the clubhouse to warm up and get some between-starts practice in. (Although, eventually– as in fifteen minutes or so before game time– the position players took to the outfield to stretch and run a few sprints, etc. before getting underway.) 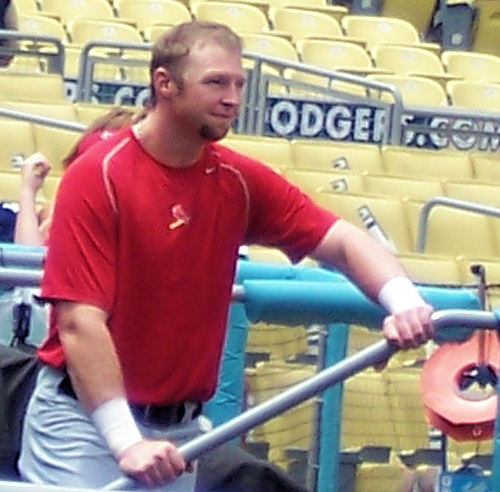 Chris Duncan steps out of the clubhouse to see what there is to see from the dugout before Game Three of the Dodger series in LA. 7.23.06

Dunc really seemed to be taking in the whole atmosphere of Dodger Stadium. As the hours preceding the game ticked away, he came out of the clubhouse on several occasions just to, perhaps, enjoy the view. He would sort of loiter on the top steps of the dugout and just look around with a pleasant, if not pleased, look on his face. I got the impression that his arrival to the Big Leagues was finally beginning to register… in a very good way. 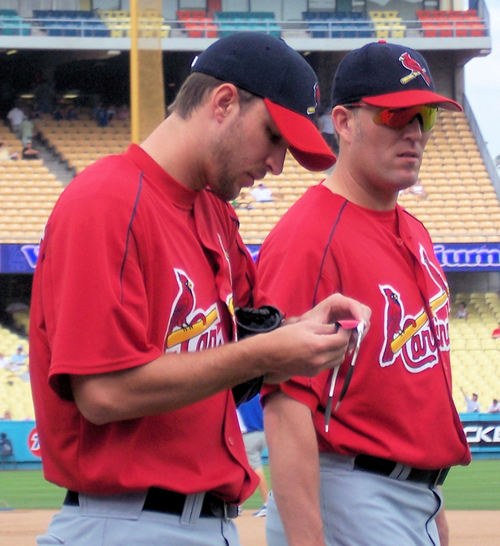 Relievers Adam Wainwright & Braden Looper walk from the dugout to right field for pre-game warmups before Game Two of the Dodgers series in LA. 7.23.06

As you may have noticed from other pictures in this collection, these two fellas did most of their workouts together.

By the way, Adam’s trying to fix his sunglasses. He spent some very dedicated time working on them before getting started with his warmup routine.

Game Three starter, Jason Marquis’ pre-game catch progresses as he begins to go through his windup before each throw to catcher Gary Bennett. 7.23.06 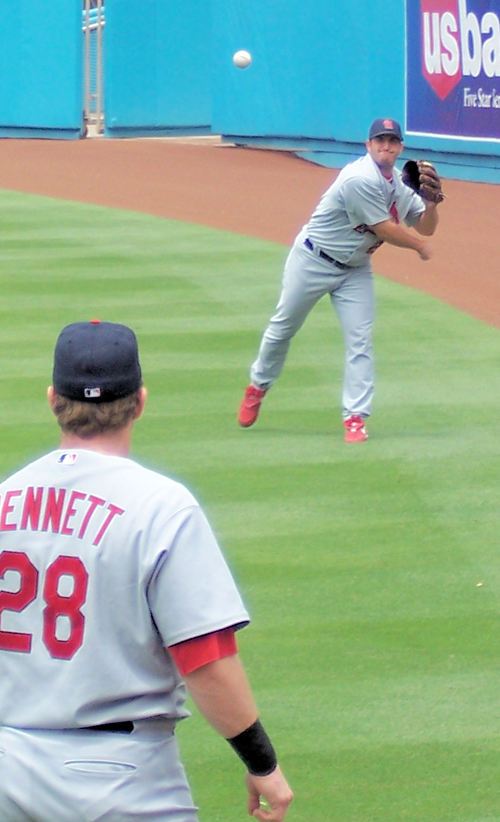 Game Three starter, Jason Marquis, and his catcher Gary Bennett begin their pre-game warmup by playing catch in the right field grass outside of the visitor’s bullpen before the final game of the Dodgers series in LA– and for the season. 7.23.06